Let us be clear on what free speech truly is. The words people speak, write, tweet; the beliefs they are known to hold, the flags they fly, the symbolic, non-violent ceremonies and rituals they enact, the insignia, paraphernalia, the goose-stepping, Hitler salutes they dick around with—all that is protected speech, licit in natural law.

So long as these oddities and idiosyncrasies, whether performed alone or in groups, thoughts harbored or shared in public—so long as no violence accompanies such speech or behavior (prohibited here is violence visited on animals as well); so long as mitts stop at the next man’s face: SPEECH. It’s all speech. It should be free, unfettered and as wild and as wanton as it can be.

Spoken, written, preached: Impolite and impolitic thoughts are nothing more than thought crimes which ought to be ferociously protected by a free people. By logical extension, any accusations of Naziism—if leveled at a belief system, rather than at palpable violent actions—is suspect.

Thoughts and words spoken or written that are not politically polite—for example, racism; Naziism—ought to retain protected status as speech beyond the adjudication of law-makers, bureaucrats, mediacrats, educrats and technocrats.

In fact, “In the current climate,” I had suggested—and considering the inherently paranoid style of American politics—it’s worth contemplating special protections for politically impolite, racist speech.”

“In 1978, the American Civil Liberties Union (ACLU) ‘took a controversial stand for free speech by defending a neo-Nazi group that wanted to march through the Chicago suburb of Skokie, where many Holocaust survivors lived.” As a free-speech absolutist, a term Elon Musk has revived, I long for the return of what I shall term here the Skokie Standard of free speech and thinking.

In 2022, the once-grand ACLU, however, no longer vigorously defends marginalized speakers and thinkers. Instead, the ACLU defrauds the public about its mission, devoting its resources to the well-popularized causes of the Left’s privileged populations: LGBTQ demands, illegal immigrant claims-making, seekers of abortion-on-tap, looters of property and destroyers of peace and prosperity (in Orwellian speak, “peaceful protesters”).

Thus, other than that the Azov Battalion, a special unit in the Ukrainian military, is oriented toward the ethnic, white Ukrainian nation; other than that Azov insignia and iconography are rooted in national socialism or Naziism—I did not immediately detect evidence in Nebojsa Malic’s well-researched RT piece, “Western media clubs together to white-wash Ukrainian Neo-Nazis,” that the Azov are currently, actively and violently expunging groups such as, say Jews or Roma, based on typically Nazi eugenic ideation.

I therefore questioned, during the Hard Truth broadcast, the Nazi designation attached to the Azov Brigade, suggesting that, if Azov are not engaged in acts of violence against the traditional Nazi victims and other ethnics, and are merely a military battalion fighting in the Russia-Ukraine military theater—then the Nazi insignia and paraphernalia are irrelevant. These symbols then fall into the category of ritualistic, offensive speech—thought crimes—the kind for which the Left criminalizes the Right.

This I say despite the fact that, as a longtime critic of American foreign policy, my sympathies here are firmly on the Russian side. Putin’s war in Ukraine is a war for which there are plenty reasons, all of them vindicating Russia (although such a statement must be qualified by saying that reasons for war are not the same as justification for war. A war of aggression is seldom justified).

Since the American Left is forever criminalizing the Right for thought crimes, pro-Russia sympathies notwithstanding, principle is paramount. It will not do to expediently visit the same on the Azov, namely vilifying the brigade for thought crimes.

Moreover, if to believe “the Empire of Lies,” to use Putin’s term for the United States in his epic pre-war address, Russia claimed it went to war to cleanse Ukraine of Nazis. There is little truth in this, however. For where is this emphasized in Putin’s speech? It isn’t. The Nazi ruse is near-redundant, sort of an afterthought in Putin’s cogent address to the nation. The overriding reason for war, to quote Putin, is “the eastward expansion of NATO, which is moving its military infrastructure ever closer to the Russian border.” On the facts, US policy toward Ukraine and Russia has not promoted peace between the two, but sought to sever the former’s centuries-long ties to Russia and bring it into the US-led NATO sphere of influence. Cold War is when conflict outweighs cooperation. Détente is when conflict and friction are reduced. The US has sought a new cold war with Russia. Those were Putin’s salient points.

It is clear: Azov has a fight with the Russians. Its vigilance might also be in support of the Ukrainian white ethno-state. But if this is the case, and the battalion’s war doesn’t involve ethnic cleansing other than their battle to repel a Russian invader—I would put it to the reader that we on the dissident Right should not in any way adopt the Left’s evil of prosecuting thought and speech crimes, and should not be bothered by the Azov’s belief system, flags, goose-stepping and assorted attire, all no more than accoutrements of speech. I do agree with Mr. Malic that it is worse than hypocrisy—treasonous? —for Western press and politicians to ignore the white nationalism of Ukraine’s defenders as they criminalize white nationalists stateside.

Against this backdrop, Nebojsa Malic joined David Vance and myself on HARD TRUTH to discuss his RT column, during which I questioned the Nazi designation attached to the Azov Brigade, suggesting that, if Azov are not engaged in palpable acts of violence against the traditional Nazi victims and other ethnics, and are merely a military battalion fighting in the Russia-Ukraine military theater—then the Nazi getup is irrelevant. These symbols then fall into the category of ritual, impolite speech—thought crimes—the kind the Left is always criminalizing the Right for. Nebojsa and David counter with facts to the contrary. All have a jolly good time. Join us and SUBSCRIBE. 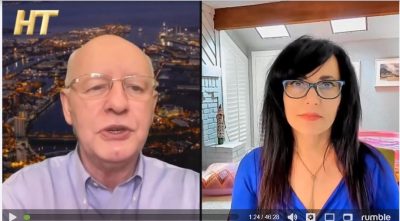