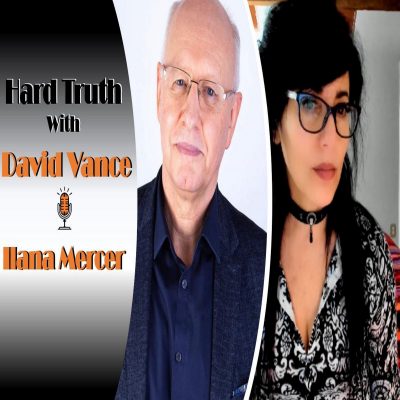 Weekly HARD TALK Rumble conversation with David Vance, pre-recorded on Wednesdays, airs every Thursday.
In addition to Rumble, David and I are on podcast in the app stores. Subscribe to “Hard Truth With David Vance & Ilana Mercer.” Get our dulcet tones in your car. Axeman Sean Mercer blasts the Intro and the Outro. It’s worth it just for Sean’s superb playing and composition. Yep, we have our own music and it’s second to none. Please Subscribe to show your appreciation; we really appreciate that.

“The D-Bomb Has Dropped & Why ‘Mixed-Race’ Is Really Black,” December 20, 2022
“Musk Restoring Twitter. Treason On The Border; GOP MIA,”
Hard Truth, December 8, 2022
“Trump Trashes A Triumphant DeSantis – Gloves Coming Off. Climate Conference in Egypt; The Heat is On,” November 11, 2022
“PM Rishi Sunak Owned By Globalists; Democrats Owned By The Devil,”
October 27, 2022
“Martha’s Vineyard Migrants Get Civil Rights Lawyers; January 6 Prisoners Dumped By GOP,” September 22, 2022
“Monarchy in Mourning — But Did Queen Elizabeth Drop The Ball?,” September 15
“From Iron Lady To Party Girl – Individualism Vs Feminism,”  September 1, 2022
My Talk With The ‘Jolly Heretic’ About The Future Of America, August 11, 2022

“Tucker Cancels GOP, So Should You: ‘Republicans Have Done Nothing To Defend YOU’, May 19, 2022

“Extradited! Why Assange Fears Being ‘Epsteined’”

“Charlottesville: Being White, RIGHT & Rightless – No Speech, No Assembly; No Safety,” December 9, 2021

“Dorsey out, even more Woke in; and the OMG! variant whacks the West,”


“The Wokerati Takes A Beating in US Elections; Learjet Liberals Plot Against Gasoline and Goshawks In Glasgow,” November 4, 2021

“Toward The Covid-Centered Anthill Society: Nobody Identifies & Defends The Individual Right Of Self-Ownership,” October 28, 2021

“In Praise Of Whipping Horsemen: To Whip Or To Rein Is Not The Question,” September 30, 2021

“An Effective Military Must Put Hets, Homos And Anything In-Between Back In The Closet,” August 5, 2021

Weekly With David Vance:  “The Controlled Opposition: Candace On Tucker Is WRONG About The Riot and Rut Crowd,” June 30, 2021:
WATCH

Weekly With David Vance: “Distinguish Critical Race Theory From Marxism: Your Life Depends On It! June 1, 2021

Weekly With David Vance: A YouTube discussion on “Whiteout for Whites“: May 26, 2021

Weekly With David Vance: A YouTube discussion on “The US Military: Statism Without Steroids,” May 18, 2021.

With David Vance: A YouTube discussion on the Floyd Trial.

With David Vance: A YouTube discussion on Vaccine Passports, April 16:

With David Vance: A YouTube discussion on the illogic of the systemic racism construct, March 24, 2021:

Interview: “Woman on Fire: Passion, Liberty, and Reason, With Ilana Mercer,” By Buck Johnson of the Death to Tyrants Podcast , November 24, 2020.

Mises Institute in Seattle: Why American Democracy Fails: September 14, 2019, address by Ilana Mercer on “How Democracy Made Us Dumb,” and YouTube.

Free Speech Forum of  the Texas A&M University. Date: May 1, 2018. Topic: “What’s happening in South Africa was baked into the political cake.”

The John Fredericks Show, out of Virginia. Date: Friday, December 29. Topic: The widely published and popular “Why Hatred Of Whites Is Here To Stay.” The YouTube.

A wide-ranging discussion about Donald Trump with Chuck Morse, April 4, 2016

Into the Cannibal’s Pot: Lessons For America From Post-Apartheid South Africa, The Bill Meyer Show, July 19, 2011  (pocast I)

Into the Cannibal’s Pot: Lessons For America From Post-Apartheid South Africa, The Political Cesspool, July 16, 2011 (podcast)

Ilana has spoken on a variety of topics related to national and world events. While becoming a regular voice on the conservative and libertarian circuit in North America, she has also been featured on Seattle Public Television, the Australian Broadcasting Corporation, most recently on RT, the global Russian television news netwrok (links are here & here), and more. Ilana has turned in outstanding regular appearances on shows such as “Talkback,” nationally syndicated by CRN, Digital Talk Radio, and Voice of America (with Austrian-persepective investor, Jay Taylor). Other national appearances include Premiere Radio Networks’ “The Sean Hannity Show,” “The Mike Church Show,” which airs mornings on Sirius XM Patriot; “Conceived in Liberty,” which airs on the Accent Radio Network; “WorldNetDaily,” which is heard on Radio America,” and “American Breakfast,” which was syndicated in 250 markets. Aside from international appearances, Ilana has also lent her expertise to a large number of local market stations. Most recently, ILANA delivered an address at the Mises Institute’s Seattle gathering on “Why American Democracy Fails.” The September 14, 2019, address was entitled, “How Democracy Made Us Dumb.” Before that, on May 1, 2018, Ilana spoke at the Free Speech Forum of  the Texas A&M University.  Topic: “What’s happening in South Africa was baked into the political cake.”

It’s Biblical, Zelensky: A Leader Who Fails To Negotiate For The Lives Of His People Has Failed

Republicans’ Main Focus: Showing Off How Black-Focused They Are

How ‘Renewable’ Technologies Trash The Environment, Hurt The World’s Poor And Its Critters

ilana Mercer: On First Principles, The Person Vs. The Polemicist And Life After Politics

NY Psychiatrist Aruna KhilaWhiteMan Has Murder On Her Mind

Distinguish Critical Race Theory From Marxism! Your Life Depends On It By ilana mercer

The Problem Is ‘Systemic Anti-Whiteness,’ Not Marxism, Not ID Politics

THAT KISS, By ilana mercer

Coronavirus And Conspiracy: Don’t Be A ‘Covidiot’ By ilana mercer

How Do We Know We Don’t Have A Country, Part I By ilana mercer

Address to Texas A & M University Free Speech Forum (May 2018): “Into The Cannibal’s Pot: Lessons For America From Post-Apartheid South Africa,” By ilana mercer

A Muslim Ban Is Not Illogical Or Immoral

Republicans Will Regret Celebrating Robert Mueller As Savior (And Other Stuff)

Hillary Scoffs And Coughs On The Country