As this column pointed out in 2014, “the struggle for Ukraine” is a chapter in a series of US orchestrated provocations, which began with the expansion of NATO (North Atlantic Treaty Organization) eastward to abut Russia’s borders—an expansion begun by President Clinton and pursued by Bush and Obama alike. It gathered momentum with the US-backed attempts to incorporate Georgia and the Ukraine into the North Atlantic alliance, forgetting that the Ukrainian people, not unlike the “American People,” are not one people. The country is riven—divided into Western and Eastern regions, respectively. The West has been seduced by potential EU membership; the East is culturally and historically enmeshed in Russia. The disputed Ukrainian regions—mainly the Donbas, Crimea and the Black Sea city of Odessa—are Russian-majority separatists, and are almost entirely ethnic Russian.

With central and eastern Europe being swallowed up progressively by NATO, Russia finds itself between Scylla and Charybdis—allow a buildup on its border, or act, for it has legitimate security concerns. On its border, Russia will soon have to endure the provocation of the NATO club, carrying out military maneuvers. As the Eurasia Review has quipped, “America has a military presence in the Black Sea and in several former Soviet republics.” Imagine if the Russian military sailed the US Atlantic and Pacific coastlines, as well as the Gulf of Mexico? As we know so well, NATO, at the behest of its paymaster, the USA, would never-ever dream of effecting regime change anywhere in the world. It’s not like the US has done that before!

Kiev is already controlled by Washington (through the IMF, the International Monetary Fund). We all remember (or should) how Obama State Department floozy Victoria Nuland was overheard and recorded plotting to “midwife a new, anti-Russian Ukrainian government.”

You can see why the US State Department has purportedly requested recently that Russia not make its demands public. Making these public would show Russia’s security concerns to be immanently reasonable. And Foggy Bottom has no intention of allowing Russia to be anything but demonized.

Before his untimely death, the late Stephen Cohen, the foremost scholar of Russian studies, had warned of just such a conflagration with Ukraine as a catalyst. On the facts, US policy toward Ukraine and Russia has not promoted peace between the two, but sought to sever the former’s centuries-long ties to Russia and bring it into the US-led NATO sphere of influence. Cold War is when conflict outweighs cooperation. Détente is when conflict and friction are reduced. We’re in a new cold war, argued Cohen, more dangerous than the Cuban missile crisis of 1962.

Although Ronald Reagan and Mikhail Gorbachev, who understood and feared nuclear weapons, thought they had ended the frightful Cold War, by the early 1990s, Bill Clinton had ignited it. It all began, in Cohen’s estimation, with President Clinton expanding NATO and bombing a Russian ally, Serbia. Although Bush Sr. had cast Russia as a defeated power beholden to America; Clinton amplified this characterization. Russia to these leaders had become a “vassal state.” Bush II, for his part, had flooded Russia with waves of “Democracy promoting” agitators. In a word, it is the US that has meddled in Russia in an attempt to make it over in its image.

So, why is the new cold war so much more dangerous? As Cohen had explained in his voluminous work on the topic, we have been raised without nuclear war awareness. In swallowing up countries and pitting them up against Russia, NATO, moreover, has moved the epicenter of any putative conflict to Russian borders. Whereas proxy wars used to take pace in Africa (Angola, for instance); now these are ongoing closer to Russia—in Syria, Georgia and Ukraine, increasing the likelihood of conflict.

After the Cuban missile crisis, cooperation ensued, as the crisis awoke both sides to the dangers of a war to end all wars. Since then, however, nearly all cooperation with Russia has stopped. Talks have stalled, treaties have not been revived as they ought to have—although President Joe Biden’s administration must be commended for renewing the New Strategic Arms Reduction Treaty between the US and Russia, lapsed under Trump. And both sides are developing “useable nuclear weapons,” which is Orwellian speak for working to make nuclear war more user-friendly, as though that were morally acceptable or practically possible.

Scurrilous catalysts of a Cold War redux are the CIA, the FBI, the Defense Department and the alphabet soup of intelligence agencies, all proven to be malign, politicized forces in recent conflicts and wars, engaged in expedient myth-making. They cooked up the Russiagate libel, and actively crafted the “myth propagated by elements of the US intelligence community that Putin is attempting to subvert American democracy.”  “The reverence with which some liberals greet pronouncements made by today’s intelligence chiefs is in sharp contrast to their past critiques of the malevolence and misinformation spread by” the intelligence community, notes Irish historian Geoffrey Roberts.

A read through the fevered briefs produced by America’s once-venerable intelligence agencies reveals that these are artsy concoctions scribbled by girls like Lisa Page and Peter Strzok, whose personal correspondence is a portmanteau of hysteria and hate: “F–k the cheating motherf—ing Russians. Bastards. I hate them.”

A not-so-silent Greek chorus are America’s media, ever tuned-out, turned-on and hot for war. Having shed all fidelity to fact and truth, media, the likes of the New York Times and the Washington Post, inch Russia and America ever closer to conflict by constantly lying about and libeling Russia. Rumors for which no evidence can possibly be adduced are regularly recounted as facts in newsrooms that now function as rumor mills.

Finally: The reason this is a new Cuban missile crisis only more foreboding is that America has sundered what Cohen has referred to as the Parity Principle—the custom in diplomacy of considering both sides to a conflict. Leaders and thinkers who attempt to avert conflict with Russia are thoroughly demonized and destroyed, even accused of treason. Naturally licit behavior—comity or diplomacy with Russia—is criminalized by a Federal Government that has enough laws on the books to indicts each one of us, if it so desired. Witness the Helsinki summit, for which Trump’s diplomacy saw him branded a traitor. Anyone who wants to reduce pressure with Moscow is run out of town.

So far, the political storyline du jour has been manufactured by America’s gilded elites. To this, DC operative Karl Rove confessed during the era of Bush II: “We’re an empire now, and when we act, we create our own reality.” When you’re the most powerful entity in the world, as the US government certainly was—you get to manufacture your own parallel universe with its unique rules of evidence and standards of proof. What’s more, as the mightiest rule-maker, you can coerce other earthlings into “sharing” your alternate reality. And when war is on the horizon, America’s elites enter a state of hysterical mass contagion, almost like animals in-heat.

Why wage a war in furtherance of interests not our own? ask paleoconservative patriots like Messrs. Pat Buchanan and Tucker Carlson. The question, alas, is a non-sequitur, as it is incorrectly premised on the false notion that the United States government and Department of State conduct foreign policy in the interest of the American people. The assumption of congruity between US foreign policy and the interests of the American people is utterly false.

No such congruity exists. US State craft is driven, first, by the arrogance of power and delusions of ideological superiority, as well as by self-serving elite concerns. The US ruling interests to prevail are those of “The Blob” (the permanent foreign policy establishment), military-industrial-complex, a media also engaged in expedient myth-making, not news reporting, crooked corporate elites, and a sanctions-giddy US Congress, in which there are currently no pro-détente thinkers (nor thinkers, for that matter).

To remain powerful, these factions must reflexively project power. Because the relationship between the elites and the American people is zero sum, the stronger the elites aforementioned get; the weaker and more imperiled the American People become. 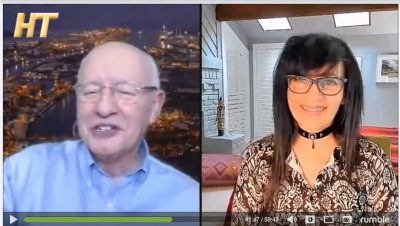