The masses crave an opiate. Their political overlords know how to exploit the attendant and innate tendency for groupthink. As soon as the usefulness of one faith (Covid) expires; another takes its place (Ukraine), courtesy of the ruling elites, and with the complicity of the crowds. Now that Covid conformity has been replaced with the requirement that we all find religion on Ukraine, debunking the bunk becomes all the more important.

The finding of American-installed WMD (Weapons of Mass Destruction) laboratories located in Ukraine, near the Russian border, is certainly a reminder of the extent, the depth and the gravity of the American State’s lies about this conflict and its genesis. Put it this way: If Russia had American privileges, namely the right to invade sovereign countries while retaining its virtue; these biowarfare facilities—copped to by Victoria Nuland, one of the American architects of the February 2014 coup in Ukraine—would have served as casus belli (provocation) for war.

I abhor what is, on its face, a Russian war of aggression. However, knowing the history of the conflict leaves no room for doubt: The Russian Bear was poked, and poked and then some.

I had framed the duty of diplomacy and statesmanship at which Ukrainian President Volodymyr Zelensky has failed so miserably and with such grave consequences for his countrymen as realpolitik.

Realpolitik is practical politics, the art of getting along, differences and all, in a real world in which reality, especially power differentials, is accepted and dealt with. The onus was on the Ukrainian president to practice realpolitik with his powerful neighbors, the Russians, I argued. Zelensky ought to have shown Putin respect and negotiated an agreement with him, one that would have appeased Russia with respect to Ukraine’s outsized, idiotic NATO and EU aspirations. Promise the Russians “a non-aligned, neutral Ukraine,” is how Colonel Doug McGregor put it.

“When you’re a country like Ukraine and you live next door to a great power like Russia,” he posits, “you have to pay careful attention to what the Russians think, because if you take a stick and you poke them in the eye, they’re going to retaliate. … States in the Western hemisphere understand [great-power politics] full well with regard to the United States.”

With his fatigues, simplistic jingoism and facility with TV optics and social media—Zelensky certainly appeals to the war channel females (Fox News) and to distaff worldwide. But he has been worse than useless in the grander scheme of things. As Mearsheimer points out, matter-of-fact, Ukraine is going to lose more territory, its economy has been wrecked as are its cities and infrastructure in ruins. Eastern Europe is becoming more unstable. China and Russia have been thrust into each other’s arms.

The West claims the blame lies solely with Putin, to whom are attributed assorted phantasmagoric expansionist programs and projects. According to this angels-and-demons Disneyfied storyline, Putin plans on claiming the Baltic states of Eastern Europe “out of a longstanding desire to resuscitate the Soviet Empire,” even though the Russian president has disavowed the creation of a greater Russia and certainly doesn’t have the economic wherewithal to mount protracted invasions and occupations.

The truth is that, starting in 2006, the West made the decision to continue to expand NATO to the Baltic states and eventually to Ukraine. Russia had “swallowed” this initial NATO expansion, but made it clear as early as 2008, that thereafter, expansion would constitute an existential threat to it. But the West had always intended to include the former USSR territories within NATO and the EU and turn them into what Mearsheimer dubs “pro-American liberal democracies” in the (miserable) mold of the USA, usually nudging them in that direction rather energetically and certainly manipulatively via color-coded revolutions.

To all intents and purposes, America had made Ukraine a de facto NATO member, arming and training them, explains Mearsheimer. So it was that in February of 2014, a coup, supported by the USA, in Ukraine, saw a pro-Russian president being replaced by a pro-American prime minister.

Indeed, prior to Russia’s invasion, the US had been arming the very Ukrainians who had been clashing regularly with the Russians in the Donbass region. And while by necessity “America has [in recent weeks] rushed to reinforce eastern Europe with thousands of troops and dozens of warplanes”—still more revealing is that, “American special forces had been training potential partisans in eastern Ukraine” for some time now.

Come 2021, in what was the height of provocation, the US flew strategic bombers over the Black Sea, forcing Russia to scramble its fighter jets. There were other such showy provocations along “the NATO-Russia frontier,” performed with U.S. Air Force B-1 bombers. For their part—also in 2021—the British had set sail in destroyer vessels in Russian territorial waters. “Innocent passage” they called it. However, the Black Sea incident, “[a]ccording to leaked classified documents,” “was a calculated decision by the British government…”

“We don’t have a border with Ukraine. It is America’s border, because they are the masters there, and all these…are vassals. And the fact that they are pumping them up full of arms and are trying to create nuclear arsenals—all this will cost us in future. …”

* Image of Victoria Nuland, whom Fred Reed likens to a fireplug with leprosy 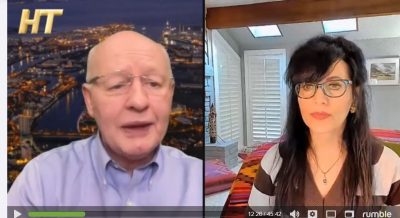