Yes, we know it was chaos, but then again there was no good way to leave that dusty hellhole—or “shithole,” as the much-missed Donald Trump would have put it.

Joe Biden was right in his “Remarks on Afghanistan“: “… if Afghanistan is unable to mount any real resistance to the Taliban now, there is no chance that one year — one more year, five more years, or 20 more years of U.S. military boots on the ground would’ve made any difference.”

Tempting as it may be for right-thinking conservatives and paleolibertarians, in particular, to use the inevitable collapse of the charade in Afghanistan against Biden—honesty demands that we avoid it.

TV Republicans, no doubt, will join the shrill CNN and MSNBC females and their houseboys, who love nothing more than to export the American Nanny State, in bashing Biden for his decisive withdrawal. The president said, “I stand squarely behind my decision. After 20 years, I’ve learned the hard way that there was never a good time to withdraw U.S. forces.”

Falling into the Republican line of partisan, tit-for-tat retorts is wrong. The man made the right choice—as opposed to Barack Obama’s. Indeed, Afghanistan was a war Obama had embraced .

Beware especially the military men, who will flood Fox New with the sunk-cost fallacy. As explained in this 2014 column, “GOP Should Grow A Brain, Join The Peace Train“:

“Military movers and shakers are heavily vested in the sunk-cost fallacy—the irrational notion that more resources must be committed forthwith … so as to ‘redeem’ the original misguided commitment of men, money and materiel to the mission.”

To that end, repeated ad nauseam is the refrain about our “brave men and women of the military,” whose sacrifice for [Afghani] “freedoms” will be squandered unless more such sacrifices are made.

The Skeptic’s Dictionary dispels this illogic: “To continue to invest in a hopeless project is irrational. Such behavior may be a pathetic attempt to delay having to face the consequences of one’s poor judgment. The irrationality is a way to save face, to appear to be knowledgeable, when in fact one is acting like an idiot.”

Besides, it’s time the military heed its paymasters, The American People, a majority of whom don’t want to send U.S. soldiers back into Afghanistan.

The best thing about Joe Biden’s decisive departure from Afghanistan was that he angered the girls and the “girly boys” of the networks as much as he infuriated the jingoists at Fox News and the globalist the world over.

How good is that?!

As always, David Vance and myself do get serious, and dish out hard, immutable truths, via podcast and video, so listen up or watch! 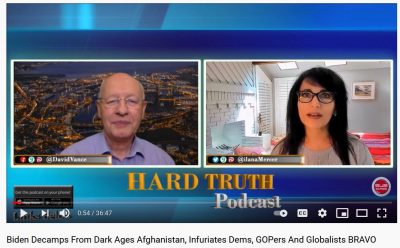