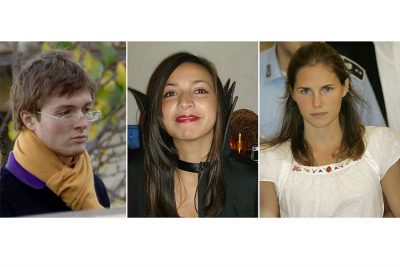 The conviction of America’s sweetart du jour, Amanda Knox, was overturned this month. Based on O.J.-like evidence, Knox was convicted of murdering her British roommate. The vicious and depraved Nov. 1, 2007 killing took place in the historic, university city of Perugia, Italy. Police bungling notwithstanding, the biological and circumstantial evidence stacked against Knox and her former lover Raffaele Sollecito was considerable.

The once-convicted killers were declared innocent, no less, and released, due in no small part to a PR blitz mounted by Knox’s family and their Seattle-based publicist. They were assisted by the country’s national media, left and right. With the exception of Bill O’Reilly, former homicide prosecutor Kimberly Guilfoyle, and Jeanine Pirro; Fox News, MSNBC, CNN, CBS, ABC—all worked tirelessly on behalf of the attractive, white kids. The conviction of Rudy Guede the American media let stand. Guede, the pretty pair’s (alleged) partner in crime, is a black man who lacked their appeal and assets.

Nor did Megyn Kelly, Shepard Smith, Wolf Blitzer, Piers Morgan, Dr. Drew, Oprah (on and on), give the time of day to the victim’s family. In defense of our homegrown popularizers and poor thinkers, however, the Kercher family was way too classy to partake in the circus created by the Ugly Americans and their aides.

In Italy, as a commentator pointed out, everyone is under investigation, including the prime minister. In the US, too few jurists and politicians are investigated and jailed. The American media has no issue with the Patriot Act. They are not in the habit of calling for arrests pursuant to the wiretapping of Americans without a search warrant. Laughably, the same lot has accused Knox’s Italian prosecutor, Giuliano Mignini, of unspeakable corruption: Mignini will serve time for … ordering illegal wiretapping in the case of a serial killer (the “Monster of Florence”).

Answer this, Megyn Kelly: Has Mignini exceeded the corruption quotient of King County’s Superior Court Judge Mike Heavey? This Washington State justice abused his office (my state; my taxes) to petition members of the Italian judiciary on behalf of Knox, in violation of Washington state’s Code of Judicial Conduct.

Besides the famously contested Kercher and Knox DNA found on the knife at Sollecito’s apartment, the victim and the alleged perpetrator’s blood comingled elsewhere in the house they shared. In the bedroom of another roommate, Filomena Romanelli, for example.

Ms. Romanelli’s room was the scene of a staged burglary. Why staged? Glass shards were found scattered atop Romanelli’s ransacked belongings, rather than beneath the items. The break-in was reported by team Knox and Sollecito. Well before Romanelli had returned to verify his say-so, Solecito told police that nothing was missing. When the police arrived on the scene, Knox and Sollecito kept them away from Meredith’s locked door with a ruse: their friend, they promised, was in the habit of locking her door. A lie. When roommate Romanelli returned, she demanded that the locked door be broken down claiming the exact opposite.

More mixed blood was found in the bathroom the women shared. As Daily Beast correspondent Barbie Latza Nadeau reported, unflinchingly, “Luminol which detects prints left in blood, bleach, and certain acidic juices” helped uncover a Knox footprint” on the bathmat, which Knox excused by saying she took a shower right after noticing blood on the mat. American broadcasters failed to divulge too that there were ample partial fingerprints at the scene of the crime, which could have been smeared during the cover-up.

Nadeau, who is the author of the book “Angel Face,” reported that “countless forensic experts, including those who performed the autopsies on Kercher’s body, [had] testified that more than one person killed [Meredith] based on the size and location of her injuries and the fact that she didn’t fight back—no hair or skin was found under her fingernails.”

Rafaelle Sollecito was unable to corroborate Knox’s alibi on the night of the murder. She had claimed she was with him and that they “cooked dinner, watched a movie, smoked pot, and had sex.” Conversely, Sollecito said he had been downloading cartoons from his personal computer at the time of the murder. But according to Nadeau, computer experts were able to confirm that there was no activity on his PC during those hours. In eerie synchronicity, Sollecito and Knox had switched off their cellphones during the night of the murder. Despite claiming to have slept in, the cells were turned on early the next morning.

On November 5, 2007, after cartwheeling and canoodling with Sollecito at the police station, Knox framed Patrick Lumumba for Meredith’s murder and rape which she claimed to have overheard. (At that stage, only the cops knew Ms. Kercher had been sexually assaulted.) Lumumba was Amanda’s innocent employer. Knox even committed this evidentiary concoction to writing in a five-page memorandum. Later she blamed police for making her. Amanda’s allergy to the truth cost Lumumba—another black man who remained voiceless in the American media—his livelihood and reputation.

“[W]e live in an age of violence with no motive,” said Amanda Knox’s besmirched prosecutor, alluding to the subterranean irrational forces that so often propel evil. Particularly well-placed to take the measure of Amanda was David Jones of the British Mail Online. For his exposé, the poor man had read Amanda’s 80-page prison diary in its entirety. Jones had also consulted a professor of criminology at Birmingham City University, a top expert on sociopathic killers. The reporter described this “privileged 20-year-old daughter of a Seattle department store executive” as “vulgar and vain to the point of narcissism”; as “pathetically self-pitying”; a creature who regarded herself “as a cruelly wronged Shakespearean heroine.”

Her own words revealed Knox to be disturbingly self- and sex obsessed.

Comprehending circumstantial evidence demands analytical and deductive thinking. These faculties are becoming rare in the Age of the Idiot now upon us, as was glaringly apparent in the deliberations of Casey Anthony’s jurors. The average individual seldom reads; he knows only what is palpable and perceivable—what he can see and feel. If he can’t picture something—see it happen on YouTube or on CSI—he certainly cannot think about it in the abstract.

Circumstantial evidence cannot be grappled with absent an ability to think in the abstract.

“If it doesn’t fit, you must acquit” was the jingle that captured the “legal” argument that undergirded the OJ Simpson case, one of the most notorious miscarriages of justice in the annals of American justice. Adapted to Amanda Knox—whose case was determined in the US, not in Italy—it goes as follows: “If it wasn’t uploaded on YouTube you must acquit.”