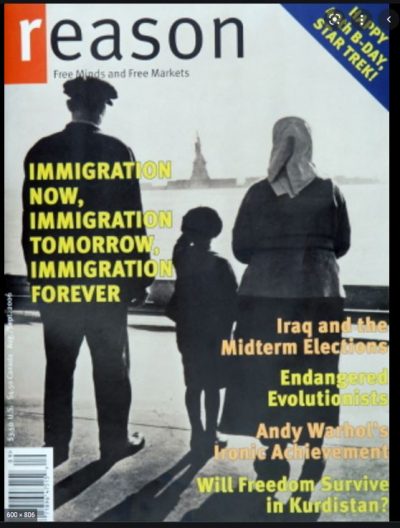 A certain establishment-endorsed libertarianism is currently being touted on the Fox News and Business channels as the only legitimate brand of libertarianism. This life-style libertarianism, or libertarianism-lite, as I call it, tends to conflate libertinism with liberty, and appeals to hippies of all ages, provided they remain juveniles forever.

As I noted, when defending Ron Paul, in 2008, from attacks by the same libertarians,

Beltway libertarians … are moved in mysterious ways by gaping borders, gay marriage, multiculturalism, cloning, and all else “cool and cosmopolitan.” Judging by Reason Magazine’s “35 Heroes of Freedom,” “cool and cosmopolitan” encompasses William Burroughs, a drug addled, Beat-Generation wife killer, whose “work is mostly gibberish and his literary influence baleful.” … Madonna Reason has exalted for, as they put it, leading “MTV’s glorious parade of freaks, gender-benders, and weirdos who helped broaden the palette of acceptable cultural identities and destroy whatever vestiges of repressive mainstream sensibilities still remained.” That sounds like the unscrambled, strange dialect spoken by a professor of Women’s and Gender Studies. [Or is it “Wimmin’s Studies”?]

Much as the Left does, libertarians-lite divine, in the country’s founding documents, all kinds of exhortations to let it all hang out. Similar kitsch and clichés were solicited from historian Thaddeus Russell on “Stossel,” earlier this year. Russel’s banal history-from-below has it that we owe our freedoms less to the Founders’ political philosophy, than to the “saloons and speakeasies, brothels and gambling halls, to antiheroes such as drunken workers who created the weekend; prostitutes who set the precedent for women’s liberation, madams who owned land and used guns, and provided cutting-edge of fashion, … criminals who pioneered racial integration, unassimilated immigrants who gave us birth control, and brazen homosexuals who broke open America’s sexual culture.” (HERE. )

To listen to this particular “Stossel” guest, the unions, and not the Hebrews, gave us the Sabbath.

(Actually, the Founders had quite the affinity for the Hebrew Bible. Some of them even spoke Hebrew—a feat that would have required a lot of that Puritanical discipline dissed by Russell as regressive and oppressive, during the Stossel segment. The American Founding Father would not have needed “drunken workers” to teach them about the spiritual and ethical significance of a Sabbath.)

Naturally, I’m down with any lifestyle the individual chooses, just so long as he or she doesn’t visit violence on others, as the Transportation Security Administration does daily. But the typical life-style libertarian is a lot more laid back than the hardcore libertarian about government goons who’re engaged in legalized crime.

Take Reason Magazine’s Nick Gillespie, lightweight libertarian in-residence on “Stossel” and on “Freedom Watch.” Gillespie wasn’t that worked-up about the War on Terror or the TSA during his umpteenth appearance on Fox Business’ Stossel. This hipster had less-than harsh words about the TSA, protesting only that a well-intentioned effort had gone terribly wrong. Gillespie, who is at his most passionate when discussing life-style laissez-faire, also seconded the general impetus of the War on Terror, if not its more diabolical aspects.

Here serious libertarians get worked up. The War on Terror is a ruse that greases the skids for unconstitutional state expansion. As for the homegrown terrorists of the TSA: each and every one ought to be jailed for every assault perpetrated, their department dismantled.

More material: Liberty loving adults are left cold by fast-talking juveniles (old and young), wearing trendy eye-wear, who insist that the cultural foot-and-mouth that is “Glee” and Gaga is the very essence of American freedoms. Grown-up Americans get that to conflate low-culture with American liberties is absolutely asinine. (And very much the embodiment of life-style libertarianism.)

As the libertarian law goes, all human beings have the freedom to act-out in any way they like, so long as they abstain from aggressing against non-aggressors. Life, liberty and property: That’s the holy trinity of authentic libertarianism; the very essence of leave-me-alone, negative, American liberties. The rest is either fluff or ancillary; libertinism is subsumed within a larger, more-inclusive category of liberty.

Ordinary, gun-toting, homeschooling, bible-thumping Middle Americans remain unmoved by people who draw their paycheques from foundations, think tanks, and academia, and wax orgiastic about MTV and Dennis Rodman. This stuff might appear sophisticated, but it is reductive and shallow—a post-graduate cleverness that lacks philosophical depth.If you’ve read this column with any consistency, you know that it doesn’t object to risqué expression; only to artistically worthless cultural products. Joining the Idiocracy, in my opinion, is never liberating, and things that addle the brain permanently are, ultimately, not liberating. Still, I can see how libertinism can be freeing in many ways.

Blasé libertarianism certainly has crossover appeal—it plays well with silly sorts both at the Daily Beast and at Fox Business. This fare, however, is unlikely to catch-on in real America.

Personally, I believe in the paramountcy of privacy. If “civilization is the progress toward a society of privacy,” in Ayn Rand’s magnificent words, then sexual exhibitionism – homosexual, heterosexual, gender-bender, and other – is anathema.

The heroic and creative inner struggle is what brings out the best in man. My heroes are in the Greek tradition: Silent, stoic, principled yet private; the American Founders, not life-style libertarianism’s philanderers.